I was going through the website removing all the image links and when I got to the maine 2009 category, I wanted to add to it. I wanted an image of Mac and I and I wanted to tell the story since then.

The trip to Maine was one of my first with camera in tow and the maine 2009 group of posts one of the first journal categories. The time with Mac was wonderful and yet six months after we got back we stopped talking. It’s been 4 years since I last talked to my old friend. 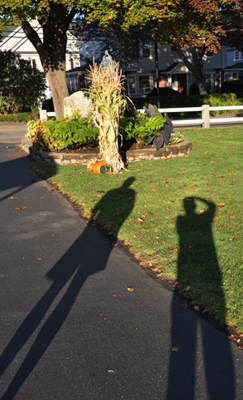 I first met Mac in June of 1968. I was a young man from Northern Ontario who had landed in Narragansett at the Christian Brothers Novitiate. We began to spend time together and by July 4, Mac, Bobby, Steve and I sneaked out of the Novitiate and walked down to his family’s summer home. It was such a simple walk and yet in retrospect it was a very daring thing – to leave the enclosure of the monastery without permission. I think that first excursion, that first breaking of the rules, set up the parameters that I would continue to use when thinking about Mac. But what I’ve come to accept in the last four years, in the silence of that time, is that Mac was never the rule-breaker. He may have led us down to his family’s 4th of July celebration, but he was not the proud rebel. He was a homesick young man.

Mac left the Brothers, went to graduate school, married, bought a house, had a son, worked and retired. His immigrant friend from Northern Ontario revealed himself to be the true rule-breaker. The old friend took a different path and continued to tarnish the golden rule.

When I remember Mac, Leonard Cohen’s song One of Us Cannot Be Wrong always comes to mind.

I lit a thin green candle to make you jealous of me, but the room just filled up with mosquitoes, they heard that my body was free. Then I took the dust of a long sleepless night and I put it in your little shoe. And then I confess that I tortured the dress that you wore for the world to look through.  I showed my heart to the doctor; he said I’d just have to quit. Then he wrote himself a prescription and your name was mentioned in it. Then he locked himself in a library shelf with the details of our honeymoon. And I hear from the nurse that he’s gotten much worse and his practice is all in a ruin.  I heard of a saint who had loved you, so I studied all night in his school. He taught that the duty of lovers is to tarnish the golden rule. And just when I was sure that his teachings were pure he drowned himself in the pool. His body is gone, but back here on the lawn his spirit continues to drool.  An Eskimo showed me a movie he’d recently taken of you. The poor man could hardly stop shivering, his lips and his fingers were blue. I suppose that he froze when the wind took your clothes and I guess he just never got warm. But you stand there so nice in your blizzard of ice, O please let me come into the storm.

a mirror in portland