The picture was taken Saturday morning. I’m shooting from the alley-way across the street. 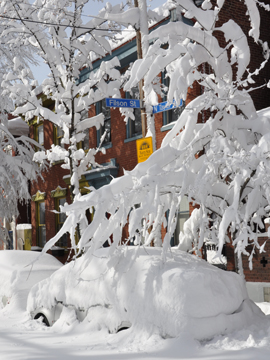 All day Friday, the news media was hyping everyone up with their predictions of snowmageddon. Rick, Sarah and I had a previous date to go to Joan Brindle’s gallery opening and we ignored the hysteria and went to the opening. I drove home proud of having made it from the east-end, via Wilkinsburg, Squirrel Hill, Oakland and to the North Side. The roads were snow-covered and given that the media had scared everyone home, there were very few other cars to navigate or be careful of.

I went to bed thinking that I’d get up early and go take pictures. At 4:00 in the morning I realize that my alarm clock is off and that there’s a chill. I get up and check things and figure out that the electrical had gone off at 11:30 last night. The dogs were not happy in the darkness. A couple of hours later, I get up, make espresso and have breakfast, but still no heat or electricity.

I open the back door to let the dogs out and find that they yard is covered in almost 3 feet of snow. The dogs jump in only to sink and get all snow covered. After the shock of sinking, they begin to eat the snow. They love to eat the stuff. After a lot of shouting I round them up and bring them in only to spend the next half-hour drying them off.