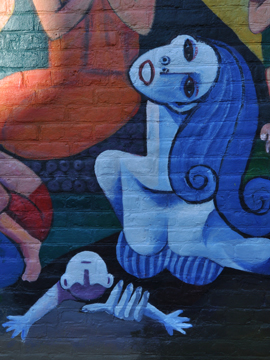 I’ve discovered the outside murals in Pittsburgh. These have been around for a while, thanks mainly to the Sprout Fund that has been spearheading the effort with a very strong grant program to local artists. On the North Side, the artists living in the housing owned by City of Asylum Pittsburgh have been using the outside of the building as their canvas. Huang Xiang began it all. In 2004 he covered his residence with Chinese calligraphy — his poems, a joyful and celebratory response to his freedom from censorship. (The image on the left is from the Pittsburgh-Burma house.)

The detail is from a mural on the North Side done by Burmese artist Than Htay in resident at City of Asylum Pittsburgh.

The slide show on the main page is images from a mural in Regent Square. The artist is Kristin Williams and the piece is titled Bird’s Eye View.