The other day my D90 gave me an error message and then shut down. I removed the battery and it started up again only to shut down again. Went online and started reading blogs and several postings talked about this particular problem. It was described as an electrical problem in the body of the D90.

Next, I called Nikon and they said the same thing and that I had to ship the camera in for repair – shock to the system. I packed it all up and went down to UPS. I was without a familiar camera. Even though, I recently purchased a D700 when offered a “pick-yourself-out-a-gift” offer. But I was intimidated by the fancy, new camera and had not yet used it. 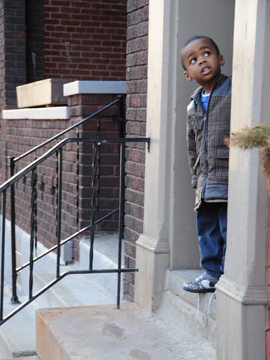 On my way down to UPS, I decided to take the plunge and use the D700 in Auto mode. (I know, I know this could get me drummed out of the “club.”) But then it wouldn’t be the first club I got thrown out of. I read the manual, switched it to Auto and walked out the door.

My neighbor’s kids were playing and I asked them if I could take their picture. (As if they were going to say no.) Here’s one of my favorites.

I agonized over buying the D700 – it’s considered a professional camera and I’m nowhere near that level of proficiency. And never mind the price, even if it was a gift – a gift that was offered back in January. It took me three months before I called and order it and then it sat on my dining room table for the next two weeks. I kept telling myself that I didn’t have time to learn it. It’s funny how things work out. Nothing like necessity to force us to do things we’re afraid of. (At one point, I considered going back to my office and getting my old D60. After all I knew how to use that one and I was already in the car. A short trip to downtown would be easy.)

If I remember correctly, I did the same thing with my first camera – put it on auto and concentrated on composition. It has taken me two and a half years to get to a point where I know my way through the technology to shoot in manual. I hope it’ll be a shorter time with this new, fancy camera.