I have all my cameras back. And tomorrow I should have the Canon point-and-shoot. I’ve wanted something that I can have with me all the time and the PowerShot G11 was highly recommended. 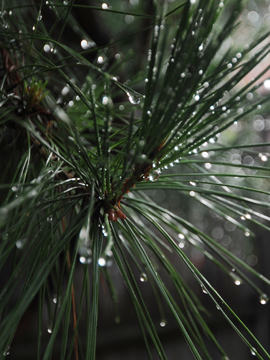 There’s no way of knowing if the problem has really been fixed, however this time the techies seemed to attack it more comprehensively. The support manager in California that I’ve been dealing with got the technical manager in New York to work the case. It was the New York person that asked for the lens and batteries. What they found was that two of my four batteries were defective. Also the battery chamber on the D90 had cracked and that got repaired. The battery problems seem right. I already threw away one of the non-Nikon batteries, because it would not keep a charge. But it never occurred to me that what I was buying at a chain camera shop would be defective. I’ve ended up buying and throwing away 3 batteries.

The image on the left was shot with the D700 after a thunderstorm. I put together the D700 with my favorite lens – Nikkor 12-24 – and went out to the back yard. I really like the images from the D700.

The other thing that I did tonight was hang 6 pictures of flower photographs that I shot. (Last fall in Maine, Mac mentioned that he rotated the pictures in his house. There’s what I could do with my photographs – print them, frame them and hang them on a rotating basis.) I gave my friend Scott six flower images that I really liked. He Photoshopped them, printed them and framed them. I know nothing about printing, and I suspect that I will have to learn something about it.