This date is so tied to my memories of Aprigliano. (This summer we didn’t go back to Italy. The uncertain economy is scaring everyone.) I’ll write of another memory associated with that long ago time. (I’m not sure what image to use with this post, but given that last year I used an image from 2006 I have an open field.) I decided to go with a pic of La Dolorosa. 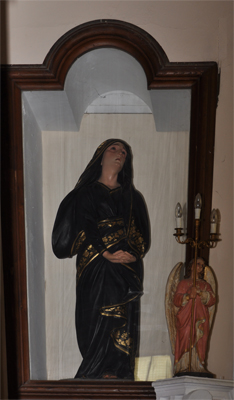 We lived in Santo Stefano; the parish at the top of the hill; the parish with the largest of the church of the hillside neighborhoods. (Saint Stephen is a common saint throughout Italy. And there are many churches and parishes named for him.) Our church was also the church of La Madonna di Porto Salvo and her feast-day was a great celebration in Aprigliano.

In the sanctuary, there were three statues – Santo Stefano in the middle, San Francesco di Paola on the right and La Dolorosa on the left. La Dolorosa is Mary represented as she would have been at the foot of the cross watching her son nailed to the wood. Most statues of the mourning mother represent her in back attire with her hands together and looking up. This statue is one of the best in the collection of such representations. (This particular representation has gone out of style in modern-day Italy. It was most popular during the interwar period – the 1920’s and the 1930’s.) I’ve always liked this representation of Mary, it’s the most human; it’s the most accessible. And it fits the Italian character perfectly. (I don’t know if Mary as the mourning mother is represented in any other European Catholic culture as pervasively as she is in Italy.)

This statue is tied to those that have died. It was a perpetual reminder of the dead. (In the modern world, remembering the dead is not cool. The media tells us to forget our loved ones that have died and to go shopping.) Many of the women of Aprigliano saw this statue as representing their lot in life, a life that after The Great War had them associating with the sentiments the statue evoked. Many of my relatives had died in The Great War. My aunt Teresina’s husband never came back from the war; my grandfather’s oldest brothers were lost in that massacre. Where I never knew these people, may parents did. And I take my attraction to this representation of a grieving mother from them.

and the warmth of the kitchen