This post may have the appearance of narcissism, but it’s more about discovery – finding an image, a suggestion in a photograph that I didn’t see at first glance.

Background – For some reason I decided to shoot some reflections, mainly because I wanted to photograph a red-and-black letterman jacket. (The images with the jacket didn’t work.) One of the best places to shoot reflection is in my bathroom mirrors. The photograph on the right is one of the reflection images.

I read the original as a picture of an old man with a striped white shirt and a green-brown tie. He’s holding a nikon that has a black camera-strap. There is a white towel in the background and the light source is coming over the left shoulder creating a reflection on the forehead. The camera and the hands hide half the face.

My first thought was to use this new image to replace the pic on my facebook page. So I began to make adjustments to get the best resolution and the correct size. I uploaded what I thought was a workable picture. But the webpage displayed only the top portion of the picture. I liked this truncated image, so I decided to go back to the original and create the partial that facebook had generated. 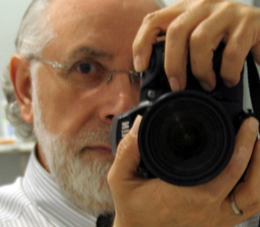 The New – The severe cropping changes the perspective. The vertical references – tie, torso, strap and towel – are gone. The new image is about someone looking out from behind a set of hands. (The camera, the big black spot in the middle, is balanced and neutralized.) The left hand has a wedding band. The reflection on the forehead is gone. The person is wearing glasses. The nose-bridge is silver, so is the left temple, so is the hair. The single eye is the focus.

Also, the hands seem separate from the face behind them. Are there two people in the photograph? Do the hands belong to the old man? If not, who’s the other person? In this rendition, the eye is at the center. All of a sudden it’s about looking out, looking at.

I never understood authors who said they didn’t know how their new book would end. I wanted to yell, “What do you mean you don’t know how it’ll end, who the hell is writing it?”

Well, I finally have my own example of an ending that wrote itself; an end-image that I didn’t plan. When I started, I had no idea what the finished photograph would look like.

Here’s looking at you kid.

in a land called honah lee