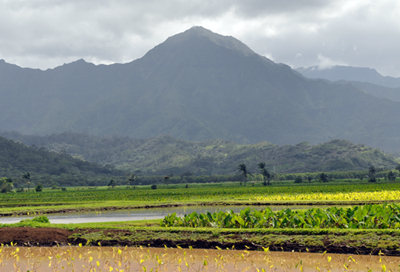 On Wednesday I did a north shore shoot with a local photography company. Five of us tourists spent the day in van being driven around the north shore. The young man who led the tour was very good. He took us to locations that were off the beaten track – great overlooks, small waterfalls, secluded beaches, state parks, the lighthouse, and the taro fields.

Taro is a root vegetable and is sometimes called the potato of the tropics. At one time it was the staple that the Hawaiian diet was based. But it has long been abandoned and the modern American diet is now default. The plant grows in conditions similar to rice – in paddy fields.

The last remaining commercial fields in the state are on Kaua’i in the Hanalei River valley. The flats on either side of the river are flooded and filled with taro plants at various stages of growth.

Outside of the over saturated southern shore and the northern gated community of Princeville, the coastal plain is green. It’s culture rural with a slow tempo. The taro fields – commercial and family fields – look back to an old time.

i wandered lonely as a cloud