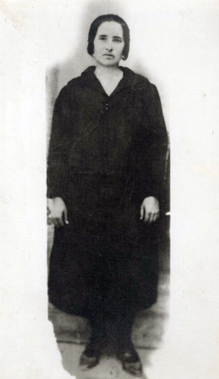 My paternal grandmother – Concetta Capisciolto – died 70 years ago today. The pic on the left is the only one we have. It’s always been in my parents’ house. It’s one of the items that travelled across the Atlantic with us.

My cousin Aurelio who in his 70’s still runs a heard of goats and makes market quality goat-cheese and ricotta. The last time I saw him, he went on and on about how I look like ‘Ciccio’ his favorite cousin and my dad. My cousin Emilia returned to Aprigliano after many years in Toronto. When her husband became ill, they left Canada and returned to their land in Calabria.

My grandmother married outside of her social and economic group when she married my grandfather – Francesco Zinga. (The Zingas were sharecroppers.) My grandfather died soon after his son was born and Concetta was given to her husband’s next unmarried brother as his wife. Concetta died some three years after her second marriage.

When Concetta died, her family took her body and buried her in the family plot. Her grave is still there. On the west side is Concetta and on the east side is her sister Teresina. (There is no grave for my paternal grandfather. The sharecropper Zingas had no money for a fancy tomb.)

lookin out my back door