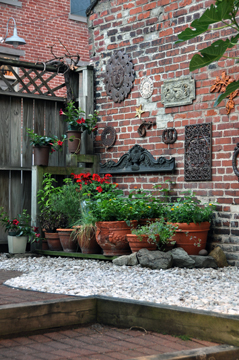 It’s taken me almost three years to come up with a new design for the back-yard.

The only maintenance I did was get someone to clean the weeds between the bricks, but didn’t seem to care that things were all over the place and that there was no unifying design. If I had to spend time outside, I just went up on the porch and avoided the back-yard. I knew I wanted to get rid of the last remnant of the bonsai shelves, but I took no initiative to dismantle it.

The shift came, because I’m on vacation and my plans got changed so I have a couple of days without having to run off to catch a plane or drive to northern Ontario. Yesterday, I took the hammer to the shelving and used the chainsaw to get rid of the posts. (I left one set of posts as a decorative piece of architecture.)

Next, I moved the large terra-cotta pots with the lantana and the ginger-jar pot with the geraniums into the area where the shelving had been and created a planting area. I also cleaned up the area where I’ve always kept the herbs pots. Moved them down so that all the pots are now in one area. I really liked the shelving posts and ended up putting two of the vertical bonsai pots on the posts. The verticals have vogue in them. I put the shelving on the ground creating a floor and arranged the pots up on the wood decking. To cover up the rough ends, I added some of the large rocks along the perimeter of the decking.

My last task was to re-distribute the wall pieces.