The church, swaddled in green gauze, was part of the original Cappuccin complex before two monks left and went up to the mountain to find solace and solitude and ended up founding a new branch monastery. The old church and monastery cemetery are now the modern cemetery of Fossombrone.

After years of neglect the old Cappuccin church is being restored.

The cemetery is one of the most efficiently designed and planned burial ground that I’ve ever seen. (In mountainous Calabria where flat land is a premium and the ground is rock, level expanses are given over to the fields of the dead. And tombs are wide-spaced, stand-alone and above ground.) Here in Fossombrone the cemetery is probably half the area of the one in Aprigliano, but holds double the number of dead.

The tombs are all underground crypts and the bodies are stacked one on top of the other. 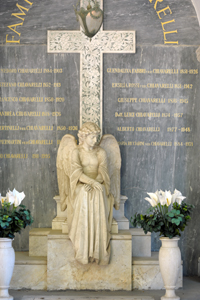 The mausoleum on the right already has 13 people buried in its crypt. And there’s probably room for another 10 or so. All the family crypts have a decorative marble/stone cover.

On the inside, the perimeter wall is lined with porticoes and under each arch is a family mausoleums; evidence of the wealth in the region. On a second ring of porticoes were many crypts in modern design. This was a surprise. And in the middle of the old cemetery were single graves with mounds of earth and stone. The grave-markers on these mounds were make-shift and temporary. (I would not be surprised if these are temporary graves and the family is waiting for room in the new, mausoleum.

There are so many shelves on the above ground crypts that the cemetery provides ladders so family members can reach the flower vases. (It looks like Home Depot with its ladders-on-wheels in the middle of the isles.) These modern hives are two stories and so well planned that the street-level is a piazza like space.

The emotional effect of this planning is a less morbid environment. I was more intrigued by the design, the traffic flow and the lack of funereal boxes than the atmosphere of a place of the dead. It all made for a neutral response. (I don’t know if families who come to visit their loved ones have the same detached response.)
.

ferrara and the etruscans