i want his hat

i want his hat 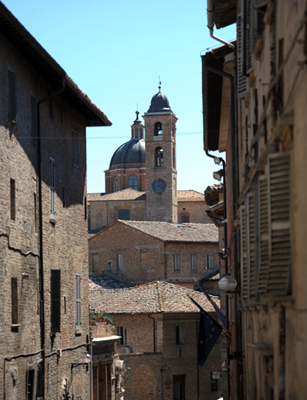 On Thursday we decided to go to Urbino. From Isola di Fano it was a half hour ride. This hill-town is a UNESCO World Heritage Site. (When I told Paul we had gone to Urbino, he announced that no one knows where that is. I hope it stays that way.)

I love Piero della Francesca’s painting of The Duke of Urbino.

(I want his hat.) How did he produce the red pigment that he used for the hat and the coat?

We approached Urbino from the south-east finding it on the horizon whenever the tree-line broke. It sat across the valley, its cathedral a blue crown.

We entered through one of its ancient gates to find a lived-in, medieval town absent of tourists. (For me that was the best. It’s hard to not find tourists in Italy, in August.) The rock-paved streets are wide letting the August sun in and the cars through without scraping the walls or the walkers.

Reminders of its Papal State status are everywhere in the city center. The cathedral and ducal palace are riddled with papal crests, statues and sacred liturgical artifacts.

Urbino is also the birthplace of Raphael. And that artistic legacy is embraced by the university. As we walked, hiding in the shade, students were going in and out of palazzos that have been turned into classrooms and offices.