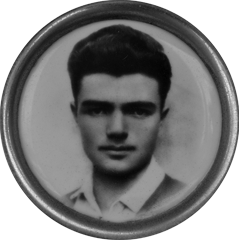 One – I am walking down to Corte and passing a house where the family and friends were sitting around a coffin. A woman had died. The coffin was in the middle of the room, shrouded with a black lace covering. Around the coffin were tall candle holders and the candles in them were all lit. Around this were chairs and people saying the Rosary. Whenever I’m in Aprigliano I walk by this same house. It is now empty, abandoned.

Three – A baby died and for the first time I saw a baby-size coffin. It wasn’t black; it had gold slats on top. The child’s mom walked behind the coffin crying. It was a sunny day and they were taking the coffin to the cemetery. The mom was a Belsito. That image is still in my head. I can picture the woman on the road leading from Santo Stefano towards Guarno and then onto the cemetery.