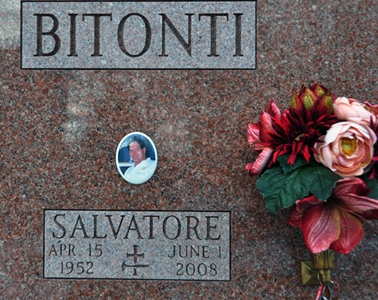 A visit to the parents now includes a trip to the cemetery. Let me say it this way, my mom and I go to the cemetery. We begin at my grandparents’ grave and then go visit all the people I knew when I was growing up in the Soo.

In the last couple of years the trip has included a visit to Sam’s grave. Sam is Frank’s brother and we all grew up together. (In my head, I can still hear his mother, her distinctive pitch, calling “Satu” – the old Calabrese diminutive and endearment for Salvatore.) Frank and I had given up the old words. We traded them for assimilation into the new Canada. We called him Sam.

I didn’t do well in the hyper-hockey environment of 1960’s Sault Ste Marie and Sam didn’t play hockey because he was crippled by polio. I was his brother’s friend; I was 3 years older than him; I was another immigrant; I was another Calabrese. Sam and I got along. He had an amazing sense of humor and could make me laugh or embarrass me with his observations. All of us would be sitting on the floor in his parents’ living-room on Carufel Avenue, watching TV and he would make a comment that had me laughing out loud; that had me speechless; that had me sweating with embarrassment. It was never anything crude; it was never anything cruel. He just knew how to hit the right nerve, suggest the right nuance, play the right ambiguity.

I wish I had known him as a grown up, because now I could appreciate his nuances, his ambiguities. Now, I could give him a run for his money and we could laugh … even louder.

the fool on the hill