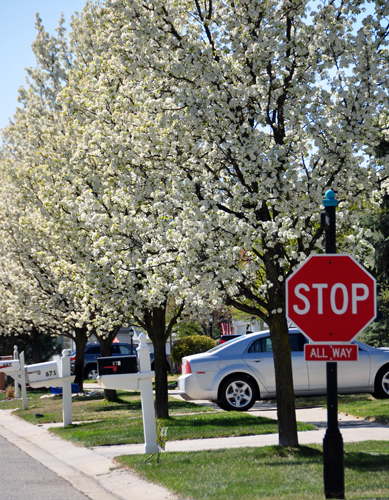 I spent the Easter week-end at Rose-and-Derrick’s. The sky glimmered azure blue, the wild-almond swayed feathery white, yellow-green leaves sprouted from winter-wood and the subdivision residents sprawled on their concrete driveways.

Derrick decided to go kayaking and I went with him to take some pics. The lake was a mirrored-blue glass. After getting into the yellow kayak he skated on the frigid waves. I headed back deciding to walk through the subdivision and take pics of the spring bloom. I first came on a group of kids shooting hoops and normally I would have asked if I could shoot them playing, but for some reason I didn’t feel comfortable doing that, and I walked on. (Should I have interpreted that feeling was a premonition?) Next, I came on a second group shooting hoops; these guys were in their own driveway. Down the street from them was another young man, he was laying bricks. He belonged to a construction company working on a neighbor’s front yard. It was Good Friday. The contrast was amazing – the young priveleged and the young indentured. My next stop was the most jarring.

I came upon a house overly decorated for Easter. The yew bushes were dripping with plastic, pastel eggs, the front door was ringed in Easter bunting and the mail-box was a kaleidoscope of sixties colors. I began shooting. Immediately a gentleman in his 50’s, balding came out demanding to know what I was doing, who I was, if I was from the area, … He took my picture with his cell. I haven’t met anyone this aggressive in years. I answered all his questions and at the end I apologized for giving him any wrong impressions. He left saying that he felt better after talking to me.

So, what am I supposed to make of all this? He obviously thought I was dangerous. He must have thought the fancy cameras were a disguise and that my real purpose was to case-the-joint. What must be the world view of a person living in a gated community, in south-eastern Michigan who on a sunny day, seeing an old man shooting pictures of his over decorated house interprets the scene as dangerous? Does the fact that the largest Muslim community in the US lives 20 minutes south on I75 have anything to do with his reaction? Does he belong to one of the new political factions that want their country back?