We had moved from my grandparents’ to our new home on Turner Avenue. (I remember going to look at houses with my dad and liking the big old house next door. It’s the house in the pic. The big old house offered 2 floors and lots of options for my own space.) 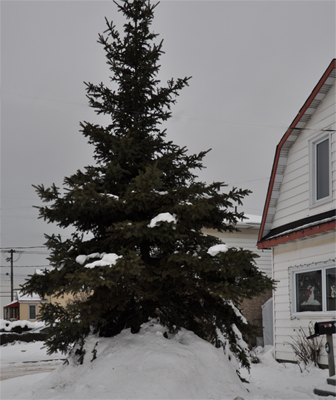 The house they bought was small, but it sat on a lot-and-a-half of land and my dad wanted the added space for a garden. He also believed that the smaller house would be easier to remodel and enlarge. The big old house would be harder to renovate. (My dad has always needed something to renovate or remodel. The little house with the truncated roof-peak was a fixer-upper, right up his alley.)

Shortly after moving in, my dad began to dig out a basement and it was my job to carry the cinder-blocks from the pallet to the mounds of earth that lined the perimeter of the dig. (I hated the job, because it meant chores rather than going out to play with the new friends I was making.) And yet watching my dad, his friends and relatives dig the earth from under the house was an adventure. I could jump down and walk the footer, inspecting the cribbing columns and hydraulic jacks that now held our house. (But never far from my mind, in that summer of 1963, was the fact that in a couple of months I would be going to a new school – St. Veronica’s.)