My thinking is that I will use this second entry to situate the time and context for this series. 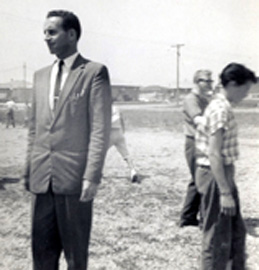 The image on the left is of Mr. Murphy my principal at St. Theresa’s. He was my first principal in Canada. When we came in 1957, we lived with grandparents and the school I was enrolled in was St. Theresa’s. (Even though I was 8 years old, Mr. Murphy put me in second grade.)

And a memory that is forever burned in my brain is of him giving me the strap, because I was loud and playing on a slide-mound during recess. (He was both handsome and scary.) I never quite figured him out and was glad when my parents bought a house on Turner Avenue and we got to leave St. Theresa’s.

The image of Mr. Murphy reminds me of how empty the area was: there are some bungalows in the background. In the late fifties this was a new subdivision. St. Theresa’s was a newly built school. Most of the families who moved here had left old James Street – the Italian ghetto – for the greener fields of the northern section of the west-end. There was still enough undeveloped land, around the school, for my friends and I to play hide-and-seek in the surrounding fields. And the parish church for the area was St. Gregory established in 1954, three years before we came to live the Soo. The original church was a long rectangular box with a flat tar roof. The idea was that the super-structure would be built once the area filled up with families. (When they finally built the new church in the early 70’s, the basement was demolished and a very different footprint was used.)

I’m heading back up to Sault Ste Marie for the Christmas holidays and am hoping to find some old pictures of old St. Veronica’s Elementary School. BTW, the date on this entry is really December 5, 2012, but I’ve changed it to fit in with the other 8th Grade post.