Sister Drusilla was the principal of St. Veronica’s School. She was also the 8th grade teacher. And she was a Sister of St. Joseph. It was the first time I had had a nun as a teacher. Back at St. Theresa’s there were no religious teachers, all were lay-people. Only the older elementary schools in the older neighborhoods had nuns and St. Theresa’s was one of the new schools in a newly-built, Henrietta Street community. 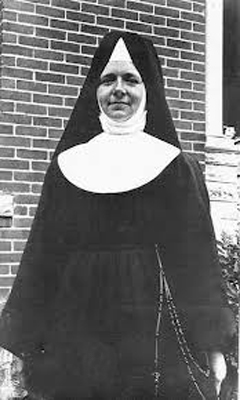 Having a nun as a teacher was strange for me. My memory of nuns was from when we were living in Aprigliano and Mafalda took me to Pietrafitta – the next hill-town over – to visit a preschool. The experience was horrendous. I hated the nun who walked us around; i hated the jail-like building; and I hated my mother for taking me there. I still have pictures in my head of massive, wrought-iron gates blocking cells and rooms and of a big, fat nun with a huge smile who I was sure was going to lock me up and beat me if my mother left. Mafalda tells the story of an out-of-control child who embarrassed her – screaming, carrying on and holding on for dear life; a child who had to be taken home and promised never to be sent back to that place. (My dad, being a man who didn’t trust nuns, was an ally.) And for the next 10 years, I was nun free.

There were two Sisters of St. Joseph at St. Veronica’s; the second one taught in the lower grades; and she was younger than Sister Drusilla.

I have to say that I got along with Sister Drusilla. Not that she was warm-and-fuzzy, there was nothing nurturing about this Irish-Canadian, but I could appreciate her sarcasm and mean sense of humor especially if it wasn’t directed me.