World War II still shapes the Italian character. My family left after the war, and here I am back.

People of my parents’ generation lived through the war years and their children carry that legacy without even knowing it. It took me a while to understand how the war changed my life. Because, my parents were too young to participate, I never thought that their actions and decisions were the result of what the war had done to their homeland. I just assumed we left for Canada, because all the grandparents were there. Certainly never thought about the fact that the economy of post-war Italy was in the toilet and my dad could not make a living.

And growing up in Canada and the US, the war stories were about winning. The books we read in high school were about British men and women who fought valiantly and won. I didn’t hear about the holocaust until I moved to America. And still no one ever talked about Italy in the war except to mention Mussolini. (I came to hate Winston Churchill’s writings. They tell a one sided story. In the writings he has no understanding of what the regular people of Italy and Germany suffered. He has no empathy for the victims of the war. Instead he brags about the resolve of the British people and the low character of the Germans and Italians.) 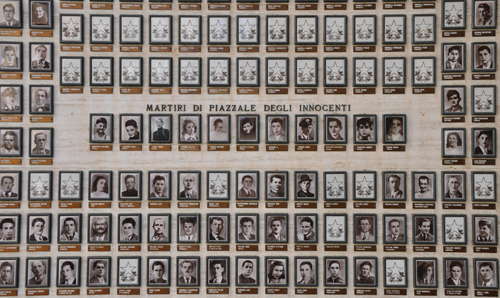 There are World War I memorials in all the piazzas of all the small towns. World War II memorials are rare. The one in Pesaro was disturbing. It’s a wall of funereal pictures of the freedom fighter.

This part of Italy was the Gothic Line – The Gothic Line – Linea Gotica – formed Germany’s last major line of defense in the final stages of World War II along the summits of the Apennines during the fighting retreat of German forces in Italy. The Allies breached the Gothic Line on both the Adriatic and central Apennine fronts during Operation Olive also known as the Battle of Rimini in the autumn of 1944. Over a million men participated in the battle.