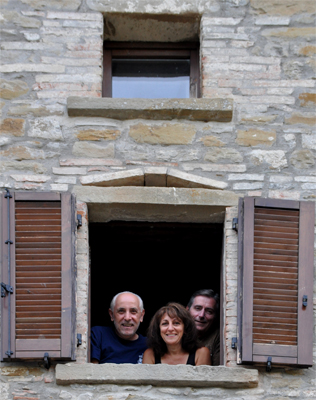 We are leaving La Tavola Marche and heading to Bologna. I wanted that iconic “Italians in the window” shot, so I asked Ashley if she would take the pic. We are leaning out of the dining-room window looking down onto the courtyard, the outside dining space. (I need to explain the close-up feature of the camera. All the people that I asked to take our pic never zoomed in. Are they uncomfortable with the big camera?) Ours was their largest unit. We had two large bedrooms with en-suite baths and a nice sized living-dining-room/kitchen.

I enjoyed our time in the mountains. It was a surprise to hear nothing but the whirring of the cicadas. And I like my attic room with its tall ceilings, beams-and-slats, wooden shutters. (It reminded me of our house in Calabria, me lying awake in bed looking up at the ceiling. And the twin beds certainly stirred the old synapse awake.) The shutters stayed shut all day to keep out the blistering sun, but at night I kept them partially opened to let in the cool night breezes. (I really liked the mechanism that, when open, kept them flush with the outside walls.)

According to Ashley, the third floor was where the family, that owned the house, lived. I find that odd, because the more common arrangement is that the animals are housed on the first floor and the family lives on the second floor. (The only thing I can think of is that it’s a huge house and may have had more than one family living in it. And that the owners chose to live as far away as possible from the smell of the animals.)