Today we headed up to Urbino. It’s my favorite place in Le Marche. It’s the Milan – modern, organized, clean and rich – of the province. The old centro is vibrant and well maintained. The surrounding suburbs are modern and development is controlled and well managed. 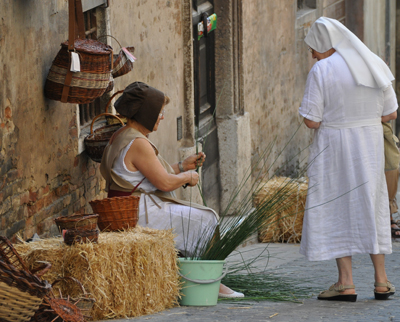 The old city-center was full of bancarelle – vendor-booths to celebrate La Festa del Duca. We got there as the vendors were setting up. (All the stalls used bales of hay to mark their perimeters. Guess it’s to go with the medieval look.) In the evening more actors would be out participating in processions, jousting tournaments, theatrical performances and other dress-up events. (We didn’t stay for this part of the entertainment.)

The image above was too difficult to resist. (I did take it with the zoom, wasn’t sure it was polite to shoot it up close.) For me, it’s two medieval characters – one playing at dress-up, the other wearing her required uniform; one representing the merchant class of the Middle Ages, the other representing the corporation that ruled at the time. (In the future, will some men walk around in Armani suits when everyone else is wearing unisex spandex and riding segways or landspeeders? Will cities host Sagra di McDonalds or Bill Gates Festivals?)