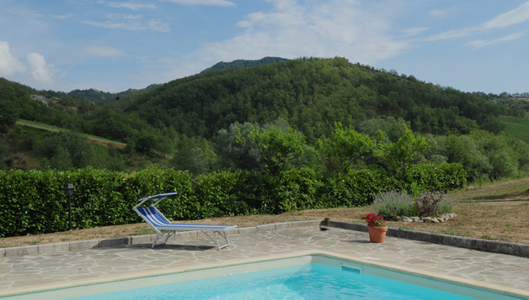 Today was a recoup. We went into Piobbico for the market and for coffee; and then headed back to La Tavola Marche to sit by the pool. (The Dutch family with its four, loud children left for the day; we had the pool to ourselves.)

It is incongruous to be in the mountains of Le Marche and to sit by a pool full of clear, blue water. It’s Italian and American at the same time. (The two young owners of La Tavola Marche are Americans.) To add to the incongruity, the water in the pool is from a sulfur spring on the property, and every morning it’s treated to make it clear and sulfur free. And finally, Natalie Merchant is on my iPhone singing:

holidays must end as you know
all these memories take them home with me
the opera, the stolen tea, the sand drawings, and the virgin sea
years ago . . .

I do like being in the mountains. It really is the summer vacation of my youth. Many families in Aprigliano would go up to La Sila for the summer months. The mountains were their retreat from the summer heat. When she was a young woman, my mother went up with my grandfather, because he lived up in La Sila with the sheep during the summer months. My dad went up to La Sila to work, to hunt, to pick mushrooms. And even though I never went, I am of that generation most associated with my parents and their narrative became my early reference point. I just assumed sooner or later we would go up to La Sila during August. (Nah, we went to cold northern Ontario.) It’s with Connie that my parents’ narrative lost its meaning. She was two when we left Aprigliano. The narrative she heard was of her parents struggling to make a better life in Sault Ste Marie and how she would benefit from their struggle.

It takes a long time to situate oneself in a family continuum and age helps to figure out one’s placement in that family line. That awareness is faint during the time when we are building careers and families. (For me the awareness has come when those two accomplishments have been safely established.) Spending the last 8 summers here in Italy brings me into the continuum that is my family’s legacy to its oldest child.

The idea of going to the sea – al mare – during the summer is a modern protocol. I guess the way we know we are old and the mantle has passed is when the next generation begins to create its own routines. All my cousins in Aprigliano now talk about il mare throughout the summer. They send me pictures of them sitting in the maze of beach-chairs and umbrellas along the Mediterranean coast. I try and explain to my parents that they are on holiday, but the idea is not something they can associate with Calabria. For them, the beach in the summer is an American experience. (Last night we talked to them, and I kept telling Rose to just say that we are in a place like La Sila. As soon as they heard that reference they knew exactly what the area we are in looks like.)