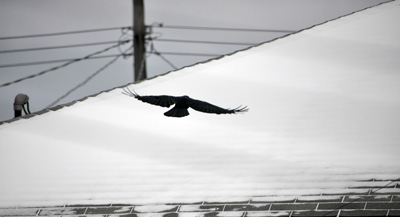 My favorite room in my parents’ house is the sun-room. It faces the garden and its windows are always curtain-free. It’s also the view that has the most memories.

Behind my parents’ garden is the Coccimiglio’s house. Giselle Coccimiglio was the beauty of my generation. (She was the classic Italian young woman with beautiful long black trusses.) And like all the immigrant daughters was very restricted in who she could talk to and who she could socialize with. (I remember thinking that her parents were more like my grandparents in their over-protectedness.) Giselle was not allowed to socialize with anyone in her class. (Frank, she and I were all in grade 8 at St. Veronica’s.) My mother would tell me about all the kids I had grown up with and she told me that Giselle married some older Italian man that her family selected. Giselle died young of breast cancer.

To the right of Coccimiglio’s is Colleen’s family’s house. We played softball in the field behind Colleen’s house. She was the only girl to play with all us immigrant boys – Frank, Rainer, Ron, Jackie, Mike, Joe, Carlo. And everyone wanted her on their team, not because she was attractive, but because she was the best ball player in the neighborhood. Even Ron with his natural athleticism and fluidity couldn’t hit as far as Colleen. Every time she was up to bat, all the fielders would move back to the road knowing they had to prevent a home run. (I don’t remember any of us caring that she was a girl and could hit and run better than us.)

Next door is Concetta Sirianni’s house. She is this gregarious woman full of bawdy language and extreme opinions. And a welcome breath of fresh air into a very proper Calabrese family. (The two Perri sisters come from families that prided themselves in a sense of propriety. A propriety that set them apart. Afterall their mother came from a family of small business people – lace makers – and their father had made it to l’America and prospered there.) Mafalda told me that Concetta has “buried two husbands” and is now involved with a social group of widows and widowers and having a great time. Mafalda wonders if she’ll find a third husband.

Sitting here drinking my morning espresso, three crows flew into the yard. (I associate crows with winter. It seems I only see them during that time of year.) I quickly got my camera and started shooting. The crow is flying away lighting over the Coccimiglio’s house.