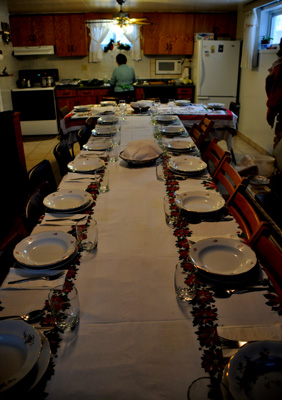 Let me begin with Christmas Eve. We always go to my aunt-and-uncle’s for this meal. (Years ago, they agreed that for one family to host both the Christmas Eve and the Christmas Day meal was not fair or practical, so the two days got split between my aunt’s family and my family.)
My favorite dish is the spaghetti dressed with olive oil and anchovies. The other pasta option is a red sauce flavored with calamari. (They still follow the old Catholic tradition of no meat dishes on Christmas Eve.) The white spaghetti with the anchovies is for the 4 remaining Apriglianesi – Egilia, Mafalda, Ciccio and Mario. My uncle and his step-mother are from Martirano and don’t eat the white spaghetti. Rose and Derrick follow the Martirani and use only the red sauce with the calamari on their pasta.

My uncle always has some surprise at this meal. This year it was Strega – a yellow herbal liqueur from Campania.(He pointed out that this particular bottle was direct from Italy and not purchased in Canada.)
This led to talking about the process that one had to go through to buy any alcohol product in Ontario. I remember the Liquor Control Board (LCB) store on Albert Street. It was lined with shallow shelves and above the shelves were pictures of the various products you could buy. The customer filled out a card with the product name and its number and took the slip up to the counter. One of the agents would go into the back and bring out your product. And my favorite product was a liqueur called Millefiori. It too was a yellow liquid, but inside the bottle was a branch and the branch was coved in sugar icing, clear sugar icing. It was a beautiful presentation. (I’ve been looking for a bottle for years with no luck. Rose said that she had also looked in Italy and was told the company no longer make the product.) My uncle claimed that Strega has a similar taste. I didn’t know Strega, so he rummaged around in his “bar” and brought out a bottle purchased in Italy not at the LCB, and we opened it and had a drink. It does taste similar to Millefiori just not as sweet. But then there isn’t a branch covered is sugar inside the bottle.

Today the meal is at my parents’ and we’re expecting a minimum of 20. And Ciccio has been cooking since this morning at 6:00. Right now the two old people are in the downstairs kitchen arguing about how many will be for dinner. (I had lunch; yelled at them for arguing with each other; (The argument was whether Ciccio should break open his 5-year-old barrel of wine. Mafalda claiming that this was a good occasion, Ciccio claiming that he had no empty bottles to transfer the old wine into.); I left them to their own devices and came upstairs to do this entry. I guess at 85 and 86 arguing may be healthy.)
There will be two distinct meals – an Italian set of dishes and a Canadian set. The Italian foods include capelletti in a chicken broth, lasagna, and various greens – rapini, broccoli, and salad. The Canadian foods include fried shrimp, fried clams, turkey, stuffing, and mashed potatoes. I eat the Italian stuff.

The pic is of the tables in the downstairs kitchen. My mother is at the sink preparing some food.