Today I sat down with Mafalda to ask about the Perri family’s geneology.
My grandfather was one of six children – Assunta, Eugenio (my grandfather), Gulia, Emilia, Stefano and Concetta. My great-grandparents were Angelo Perri and Luisa Carbone. 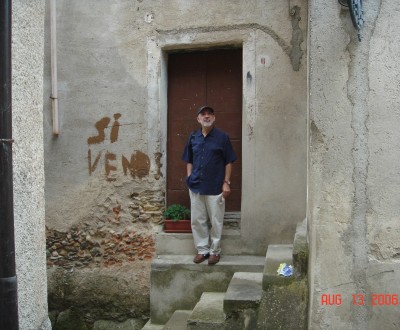 The brothers
The family story is that my grandfather – Eugenio – came to Canada and sent money back to the family in Calabria. My great-grandmother supposedly used the money as dowry for the girls and to purchase a house in Corte. (My great-grandparents raised their family in one of the torre in the hills surrounding Aprigliano. And with my grandfather’s money, they left the country-house and moved into town. The pic on the right is me standing in front of the house that my great-grandparents lived in.) But when my great-grandmother died, my great-grandfather went to live with his son Stefano and gave Stefano the house deed, even though it had been purchased with money his brother, my grandfather, had sent from Canada. (My grandfather believed that his mother had saved the money he had sent and that he could return to Calabria and make a living using his savings to buy land. Instead, when he returned he found that all the money had been spent. He packed up and returned to Canada.)
When my parents married, Mafalda’s uncle Stefano rented them the house in Corte. I was born in that house. (Mafalda tells the story that she and my dad had missed one of the rent payments – 700 lira a month – because times were hard. Her uncle Stefano came over with his shotgun and told her that if they missed any other payment, he would use the gun on them. Mafalda was outraged, because this was the house her father’s money had purchased.) I never knew that the house in Corte had been the Perri family house in town.
My great-uncle Stefano died at work. He fell while he was pruning on olive tree and the fall killed him.

The sisters
Assunta was the oldest of the Perri children. She married Eugenio Vigna and there were 6 children.
Gulia married Giovanni De Fazio. She died young and left behind 5 children.
Emilia married Luigi Carbone and they had three children. I visit with one of those children – Maria Lucente when I go to Aprigliano. Maria bought the old Perri house where my parents first lived and where I was born. She incorporated the old Perri house into her house.

Concetta married Peppino Giordano and moved to Pietrafitta the next main town on the SS178 after Aprigliano. (Mafalda remembers the least about this aunt.)

Connections
Za Nuziata is related to us through her grandmother. Her grandmother Rosaria Perri and my great-grandfather were brother and sister.