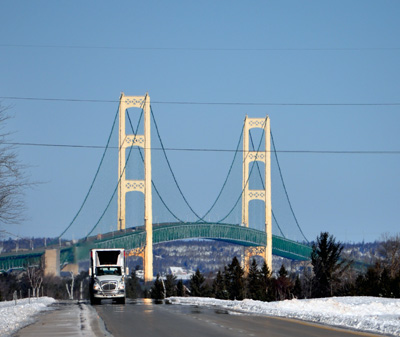 The drive north from Oxford was OK except in two places – 30 miles south of Gaylord and 30 miles before the Soo.

Gaylord is the center of the snow-belt, in Northern Michigan, and the trees surrounding the highway were amazingly beautiful in their snow covers. The winter landscape was worthy of a postcard. (Draco left behind a winter wonderland.) But all I kept thinking about was the snow storm – what it must have been like two days ago on this stretch.

After three hours of snow-free roads, I-75 became a problem. The right lane was covered with packed snow. Not a big problem given that it hadn’t iced, but the packed snow made it difficult to drive casually. Such conditions are two-hands-on-the-wheel-and-no-music driving events. All the cars got into the left lane and we followed each other down the highway like goslings following mother. And because the left lane was clear, we were able to maintain speed. After Gaylord, the road was clean and I thought, “If that is the worst I’m going to get then I’ll thank some higher power.”
There are certain markers that I use when making this trip, Gaylord is one; the sight of the south tower of the Mackinac Bridge is the other. (Once I hit the bridge, I have to steel myself for the crossing. The span is an engineering marvel and a magic string over the straits, but the roadbed and the low railings scare the shit out of me. The low railings and the missing road-shoulder make riding in the right lane feel like I can hurdle into the roaring waves at any minute. The left land is an open metal grid – supposedly the grid allows for wind currents and thus stabilizes the Mighty Mac. But riding on the inside lane is nerve-racking and feels like the car will slip and slide. But that sensation is easier to deal with than the fear of being hurled over the side, so I drive the inside lane. Throughout the ordeal, I keep telling myself that the trip is coming to an end.) Once I crossed into the Upper Peninsula the road was a mess. The north bound lanes were not clean and I drove the last 30 miles on packed snow. I just kept looking for the steel mill smoke stacks. I-75 ends at the International Bridge over the St. Mary’s river, the boundary between the U.S. and Canada. On the Canadian side of the river is the steel mill.