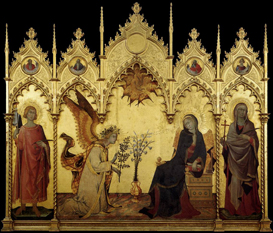 Last summer we walked into this church in Pesaro and taped to the podium was this wonderful poster – Tu sei bellezza – announcing the pilgrimage from Loreto to Assisi. When I got home and did some research, I found that the walk is an annual event sponsored by the Frati Minori d’Italia – Franciscan Brothers of Italy. The poster is what I was amazed by – its design, its concept, its colors, its use of the Gothic Annunciation to frame the title – Tu sei bellezza – You are beauty. Every year in late July, early August the pilgrimage goes from a religious center in central Italy to Assisi. Given that the 2012 walk went from Loreto to Assisi, using Mary in the poster was correct, consistent and celebratory. The designer of the poster cropped the figure of the Virgin from the altar piece – Annunciation with St. Margaret and St. Ansanus – by the Italian Gothic artists Simone Martini and Lippo Memmi. The poster is built around the cropped image of the reluctant young woman receiving Gabriel’s announcement in her study. The altarpiece has the following words coming out of Gabriel’s mouth – Ava gratia plena Dominus tecum (Hail, full of grace, the Lord is with thee).

This year’s poster announces Chi Crede Cammina – Who Believes, Walks. It features two figures, a young person and a Friar with back-packs, walking on shallow water. In its Italian incarnation the title is all about alliteration. Each word begins with a hard c sound. (BTW, the titles of both the 2012 and 2013 posters use a 6 syllable phrase. Tu sei bellezza is six syllables, Chi crede cammina is six syllables.)

The Frati Minori are hiring some amazing artists to create art that will publicize the annual pilgrimage. American churches use artists to blow up images of fetuses that are carried in rallies. Posters are homemade and announce doom and gloom or personal hatreds. None of the images of American Christianity are about beauty, inclusiveness, humanity, self-sacrifice, self-reflection.