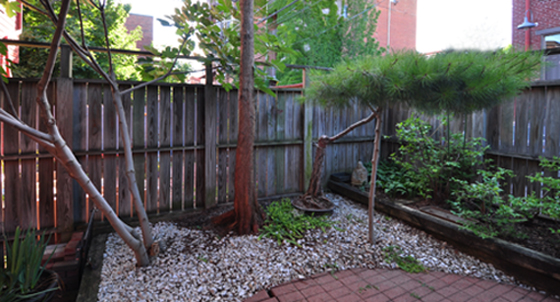 I left the writing long enough to go out back and hack off a huge limb that interfered with the wind-swept alignment. And it’s put-out-garbage night so I hid the sap-seeping branches in a steel-strong bag and threw it into the dispose pile. No one will know I ripped a limb from its trunk, chopped it into small pieces and stuffed the severed branches into plastic bags.

The heavy snow-falls, of the last two winters, have required that I put some kind of support under the wind-swept arm. Back in November I put a piece of wolmanized under the reaching branch. It totally destroyed the feng shui of the back-yard. (Controlled nature and pressurized lumber don’t mix.) So, I’ve been looking for alternatives and opportunities to replace the green-glowing two-by-four. I’ve been keeping a saw in the car thinking that if I find myself in an isolated area and see a tree-trunk with sling-shot like branches I would cut it down. In 9 months, nothing has come my way.

A couple of weeks ago, I began to clean up the fig trees getting rid of any new growth that would not make it through the winter or would sap the tree’s ability to build robust limbs. The oldest of the two trees needed radical pruning. In the trimming, I ended up with a trunk that leaned too far into the middle. I started cutting all the small branches hoping to salvage the thick trunk, but got lost in the removing and ended up with a naked trunk. No problem, I could use it to support the pine tree.

Last night I cut the naked trunk and drove it into the ground under the wind-swept branch. (In the image, it’s the thin trunk on the right, in the foreground, under the green foliage.) As I was digging the hole it occurred to me that the trunk could sprout. Figs are a weed and will grow anywhere from any cutting. Next summer, will the supporting trunk be full of fig leaves? Calabrian fig leaves and wind-swept pine needles – harmony.