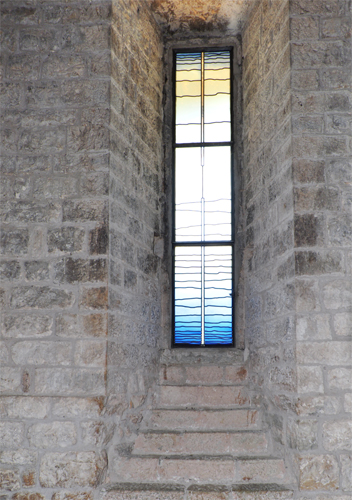 The Monastery of Fonte Avellana has a checkered history. There were periods when it had a notorious reputation. Today is boasts a library full of ancient manuscripts that the monks diligently copied, wrote and acquired.

It is a sprawling complex in an isolated wooded valley at the feet of Mt. Catria (elev. 5,600 feet above sea level) The monastery was founded in 980. Dante, who stayed here for a while, mentions it in the 21st canto of Paradiso.

Today, the monastery is a shadow of its former self. A community that at one time numbered a couple of hundred is now down to under 20. However, the Italian, Catholic tourist industry has stepped in and the monastery has become a pilgrimage site. The grounds were crawling with people who had just had lunch in the refectory and were waiting out the clock, to getting back on their tour bus, at the picnic tables that littered the visitors area in front of the monastery gift-shop.

The image on the right is of the window in the small refectory. All the windows in the chapter house and chapel are modern stained-glass and beautiful.