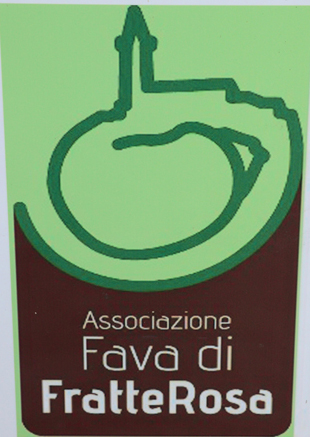 The image is the logo of a group that is re-introducing, into the small hill-town of Fratterosa, the old fava beans of their ancestors. The young man at the stand talked about how the old contadini, who lived on the farms surrounding the hill-top, relied on the fava bean for a large part of their diet. (Sarcastic me told him that all the old contadini had left and gone to America. He did laugh.)

Fratterosa is on the hilltop on the opposite side of the valley. We look out our kitchen window and its church tower silhouettes the horizon. The town is also know for its ceramics and tonight they are having a festival celebrating both the fava and the ceramics. (Where last August 15 we went to the Sagra di Polente, this year we are going to eat fava.)

The title only makes sense if you know that fava is an early spring plant. You plant in the fall and the seeds winter in the ground. They are sprouting by early April and the fava is ready to pick by the end of the month. (I remember trying to find fava in the Strip, in Pittsburgh, in late June and the guy told me, they are an early spring bean. I had forgotten that, because in Sault Ste Marie the beans are ready in June. Well that’s because the ground doesn’t defrost until late May.)