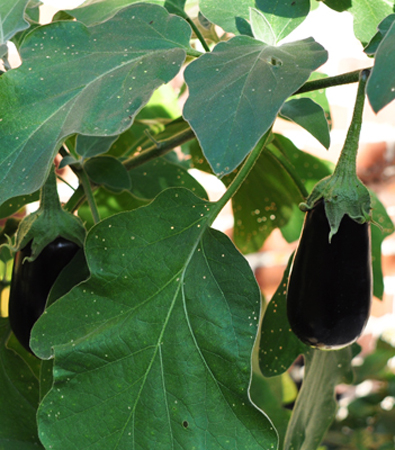 I’m trying to identify a vegetable that would indicate fall is coming and I think the eggplant may qualify. (I’m Calabrese, so jack-o’-lanterns don’t work.) My spring harbinger is the fava, watermelons tell me that summer is here and now the shiny aubergine announces fall. (Background – when we came to Canada, fave were disparaged and downgraded to horse-beans. Who in their right mind would want to eat something that suggested a food fed to horses; certainly no one who wanted to camouflage their immigrant origins? Anguria is the Italian word for watermelon. In my family, the Italian and the English got remixed and all of a sudden we began to refer to watermelon as melone. The Zingas have always been practical – take the second word of the English compound and make it Italian; all you need is a vowel. I had to re-learn anguria, because melone is cantaloupe, a different fruit entirely. In Spoleto, I remember ordering melone and expecting red fleshy sweet watermelon, only to be disappointed when they brought out cantaloupe. And finally, aubergine – what can I say, the French is so much more elegant than the English.)

The four plants that I put into pots have all done well producing 3 to 4 eggplants each. Tonight for supper I cut the last remaining ones and stuffed and baked them. To supplement the garden eggplants, I got a couple from the grocery store. The filling is made from the pulp and I always like to have a lot of pulp when I mix it with bread-crumbs, cheese and eggs. The dish had a great eggplant taste. This is unusual, because when I make it from only store-bought eggplants, the cheese and herb stuffing dominate. The freshly cut eggplants added a dimension that I had totally forgotten about. (I remember my mother preparing the dish using eggplants she had just cut from the garden and after assembling the dish taking it to the communal oven. It was a dish made on bread-baking day. The casseroles were baked on the embers after the bread was done.)