in a field of sunflowersepilogue – le marche 2013 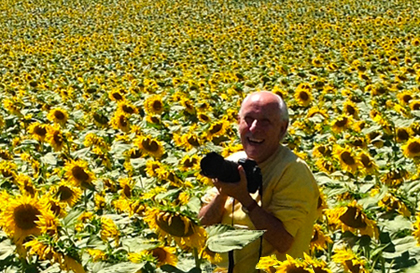 This entry is so after the fact. It’s Sunday evening, September 8, three weeks after the trip to Le Marche, but because I want to use the pic on the right, I’m pretending time travel back to Saturday, August 3 …

We’re driving from Rome to Earle-and-Suzanne’s and decide to drive through Todi, one of the towns in Umbria we really like. On the plain below the town, we saw this huge field of sunflowers that still had their yellow petals. We stopped and shot pictures. Rose lifted her iPad and took the image on the right – an old immigrant in a sea of yellow with a sweater complimenting the flower petals.

I’m putting this image in, because it captures the elation, the giddiness of the beginning of the trip. The walking into the field is like a step into the looking glass. We’ve been staying in rural settings the last three years and have never found a field of new sunflowers. It seems that by the time we get here, all we find are mature plants with heads heavy with seeds and ready to harvest. (Found out from Earle that this was a sunflower year, meaning that the crop rotation had come full circle and the farmers were planting sunflowers so that the stalks could get plowed into the soil to replenish the nutrients lost during the last three growing seasons.)

The bookend to this posting is the fact that I left the yellow sweater in the closet in the hotel-room in Ancona. (I never use closets in hotel-rooms, so I never look in them when checking out. In 2009, I left three dress shirts in a hotel closet in Lamezia.) Is the leaving behind part of the sadness, the lethargy of the end of a trip?