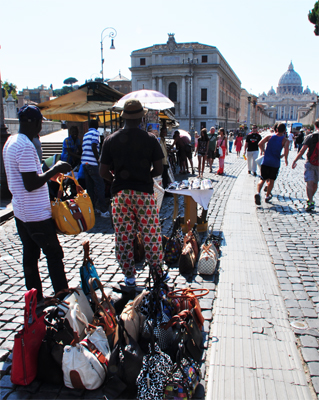 It’s Saturday, August 17 and we’ve gotten into Rome early with a goal of getting into St. Peter’s and the Vatican Museums. The Hilton bus leaves us off at the Campidoglio and we walked down Corso Vittorio Emanuele towards the river.

We crossed over on the bridge with the angels and headed down to Via della Conciliazione – the grand boulevard leading from the Tiber into St. Peter’s. It’s the connector between the cloister of the Vatican and the open city of Rome. Forget its symbolic significance, in modern times it’s the street where the pilgrims huddle during papal pronouncements, it’s the street with the Pontifica Academia Pro Vita, (Who said the Italians don’t steal from other cultures? So what that it’s one of America’s most cynical ideas? So what that the word pro isn’t in the Italian dictionary?) and it’s a street with the money changers. You want a knock-off handbag, it’s stacked on the paving stones ready for you to buy – no tax, no receipt.

Does anyone really buy these knock-offs? I can understand getting caught in a rain-storm and resorting to buying an umbrella from a street vendor, but what’s the circumstance that gives one permission to buy a knock-off purse?

Am I that removed that it’s hard for me to believe someone would actually give their money to buy a cheap repro just so that they can pretend to have a designer handbag? What have we done to women’s minds?

The workers are all Africans making their way into a first-world nation, hoping to secure a place in the new world for their children and grandchildren. The Eastern Europeans head inland to work on farms and as domestics, the Africans head for the cities to manage the bancarelle one finds all over Italy. These new immigrants are at all the farmers markets, all around the major piazzas, the famous museums, the famous fountains, the ancient ruins, the empty churches.