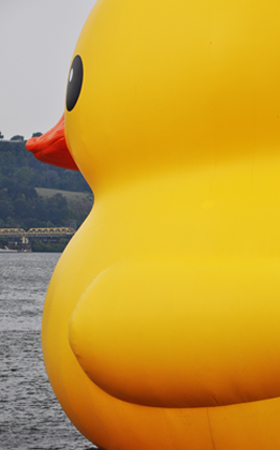 We are in the middle of a Festival of Firsts, and one of the events is Dutch artist Florentijn Hoffman’s giant Rubber Duck docked off Point State Park. It comes to Pittsburgh, its first US appearance, from a world-wind tour that includes Amsterdam, Osaka, Sydney, Sao Paulo and Hong Kong.

The yellow monster has proved extremely popular and families, from all over the region, are coming into downtown for the first time in years. The kids love the duck. I walk home through Point State Park and all week it’s been teeming with ordinary people and screaming children clutching their rubber duckie toys. (In old times, pilgrims brought their rosaries to the Vatican to be blessed. Are modern children bringing their miniature ducks to the Great Mother?) The downtown merchants are giddy with profits. Also, the 2013 Carnegie International opened this weekend, bringing into town the glitterati, but it’s the rubber duckie that’s attracting the crowds.

It’s such and odd sight on the Allegheny side of the Point. There’s nothing unique about it, except for its 40 foot stature. And I don’t understand how making a 40 foot version of a toy is art. (Maybe it’s performance art.) But Pittsburgh is the perfect harbor for this hyper sized duck, after all just blocks north of the floating goddess are the original god’s paintings of the Campbell Soup Cans.

The profile is the duck floating on the Allegheny with the West End Bridge and Mount Washington in the background.