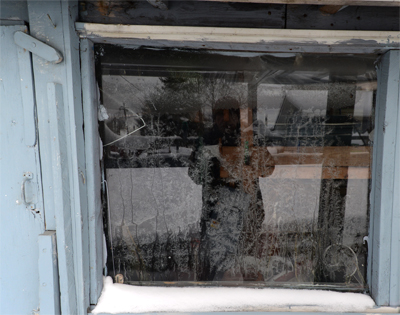 Today is shortest day of the year. And with this end begins the new light.

The drive up was miserable, not as bad as last year, but through the snow-belt – the area between Grayling and the Mackinac Bridge – I75 was a one-lane road. (I saw at least 5 vehicles that had slid into the ravines. And I decided that this would be my last car trip to this part of the world during December.)

Before leaving, I had decided to figure out how to get access while I was up here. I had talked to Bell Canada and the person I talked to assured me that I could get a hotspot device to connect to my laptop. My dad would have to sign for it, because I was not a Canadian resident. I called the Soo office to verify that they would have the device, but the woman I talked to had no idea what I was referring and insisted that there was no such device in the store. My next scheme was to see if one of my parents’s neighbors would give me access.

Yesterday evening I walked over to Gerry Pozzebon’s and asked if he would give me access. (The Pozzebons live across the street from my parents. Connie was friends with their daughter, but Gerry was too young to play with us.) Gerry offered, but believed that it would be hard to connect to his router from across the street. He suggested I use my iPhone as a hotspot. I knew nothing about that. His son talked my through it and I went back to see if I could set up the connection. The Verizon represented that the feature had to be activated from a Verizon tower in the US. I told him I was in a border city and could get to the US. He did all the configuration on his side and today I drove to Sault Ste Marie, Michigan to turn my phone on and off and sure enough I had a hotspot connection.