When we came to Sault Ste Marie, there were two families from Aprigliano that my parents were close with, the Belsitos and the Sanguinettis. Cum’amulia e cump’armunte Sanguinetti lived on James Street the old, immigrant neighborhood next to the steel-mill in the west end. And I remember us visiting them in the tall house with the narrow driveway. The Sanguinetti family was Armando, Amalia, Marisa and Joe. I babysat Joe when he was still a child in the crib. I associate the babysitting with reading Burroughs’ Tarzan. It was a thick, hard-cover book. And while Joe slept, I read. 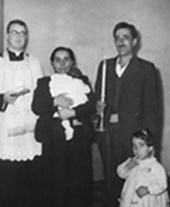 My parents baptized Joe, establishing a formal connection between the Zingas and the Sanguinettis. The thumbnail was taken at Joe’s baptism. Left to right – priest, Mafalda holding Joe, Ciccio holding a candle and Connie. (It’s one of my favorite images of Mafalda.)

In June of 72, I met Marisa and Joe in Aprigliano and we spent a month hanging out. They were visiting their grandparents, and I was visiting za teresina e zu milio. It was a vacation for me while I waited for classes, at the University at Perugia, to start – Junior Year Abroad. The best memory from this time is of Joe and I going cherry-picking. We went to the orchards below Portosalvo, climbed the trees and filled a panier with plump red cherries. We were very proud of our efforts, but when we got back to Joe’s grandparents, cum’amulia split the cherries to make sure they were edible and found tiny white worms in all of them. (Joe and I had eaten our fill while picking. Thank God for those strong stomach acids.)

From the three couples, the Belsitos, the Sanguinettis and the Zingas, only 3 remain – Amalia Sanguinetti, Ciccio and Mafalda Zinga. Cump’armunte died Tuesday evening December 24, 2013 – Christmas Eve. 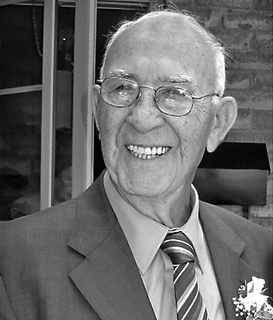 I always liked cump’armunte. He was the only friend of my parents’ who interacted with me beyond the standard Hello, how are you. He once told me about a run-in he had had with a priest when he was a kid. His disgust played right into my own disgruntled attitude with Mother Church. Other times, we would sit and talk about all that was wrong with Calabria with our beloved Aprigliano. In later years, we would compare notes on the state of modern Italy. He would get out his fact-book on Aprigliano, and I would bring my recent experiences, and we would talk about how them there Apriglianese weren’t making good decisions. If they would just listen to us, after all we had all the answers. I really liked his brash approach, his take-no-prisoners stance.

I did not go visit him those last days in the hospice. I wanted to remember the firebrand, the iconoclast who had been a role-model for a bright kid afraid to let anyone know he was smart. I did not want my last memory of this wonderful man to be that of a cadaver desiccated by cancer. He did not suffer fools gladly and yet he interacted with me.

I am glad to have known him.The titles and italics are in old Apriglianese, our dialect.