the fig trees are gone

Where last spring I was counting the number of figs on the trees and anticipating a feast of flavors, this year, I am cutting the 20 year old trunks and branches down. 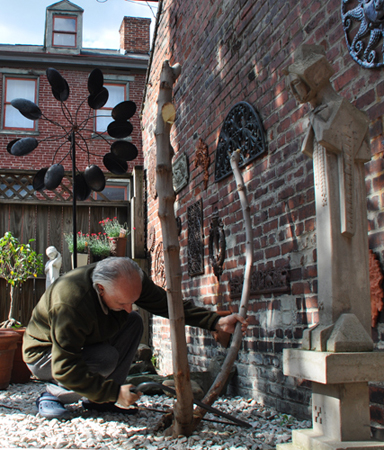 The winter was so severe that the roots were destroyed. And a cutting that had found its way from Calabria, to St. Catherine’s, to Western Pennsylvania is done. (I’m thinking of bringing back two small cuttings – a white fig and a black fig – from Aprigliano when we’re there in September.)

Other years, the branches froze, but never the roots and I’d begin the process of re-growing the trees. In the last years, the trees had grown to a diameter of over six inches and I was certain they would weather the winter; I was certain that I had passed the threshold and trees full of white-figs were in my future. But the winter of 2013/2014 was so severe that the ground froze to such a deep level that the freeze destroyed the root systems of the two white-fig trees.

I kept waiting and hoping that something would sprout from the base of the trees, but nothing. So, I finally gave up and cut the two trees down. In the pic on the left, I am cutting the smaller of the two trees. Each tree was over 15 feet tall and provided an amazing canopy.