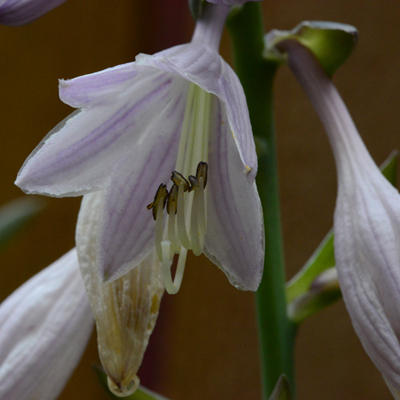 The image on the left is the result of shooting a Hosta flower at close range with a tripod. The soft brown background is the wooded fence. And all I did to the image is crop it into a square; no other Photoshop tweaks. I really like the images from this lens. The stamens are almost impossible to see with the naked eye and yet with the micro lens their black caps center the focus. (Most of the images in the slide-show, in the header, were shot with this same lens.)

This post began because of a photo-shoot with a micro lens, but morphed into an account of a medieval king and southern Italy. I added it to Italy 2014, because it’s another piece that has me thinking differently about Sicily.

I just read that the High Renaissance shift in literature normally attributed to Dante and the other Florentines really began with Frederick II in Sicily. Federico II proved an important patron of the arts throughout his entire reign. A poet himself, he prized southern French poetry and welcomed troubadour poets from the region to his court. Through the influence of these writers, a new poetry began to be composed in the Sicilian vernacular. The poetry that emanated from the group had a significant influence on literature and on what was to become the modern Italian language.

Federico was born in Le Marche, in the small town of Jesi. (The original name was spelled Iesi with an i. Many Italian towns have switched and adopted the J. And yet, the letter J is not in the Italian alphabet.)
Jesi is where I found the  amazing doors  by sculptor Paolo Annibali. 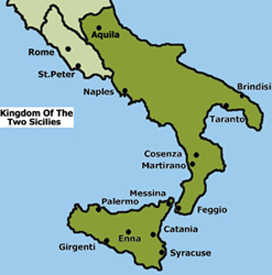 Federico was one of the most powerful Holy Roman Emperors of the Middle Ages. His political and cultural ambitions, based in Sicily, stretched through Italy to Germany and even to Jerusalem. His brilliant court which blended Norman, Arabic and Jewish elements was housed in Palermo. Also, in 1234, Federico founded the University of Naples, the first state university in western Europe.

Historian Donald Detwiler wrote: Federico was a man of extraordinary culture, energy, and ability – called by a contemporary chronicler stupor mundi – the wonder of the world – by Nietzsche the first European, and by many historians the first modern ruler – Federico established in Sicily and southern Italy something very much like a modern, centrally governed kingdom with an efficient bureaucracy.

Federico, in Italy, ruled over the Kingdom of the Two Sicilies. The kingdom was formed from the union of the Kingdom of Sicily and the Kingdom of Naples. Because of political manoeuvrings, the capital of the unified kingdom fluctuated between Palermo and Naples.

Federico II is buried in the Palermo Cathedral in a sarcophagus of red porphyry mounted on four carved lions.