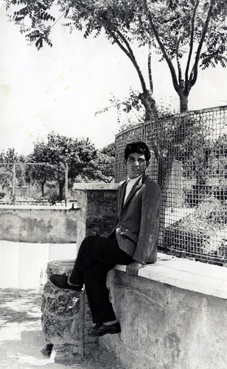 My Zinga grandparents came over from Aprigliano in the early 50’s and settled in Toronto. My grandfather Annunziato married his brother’s widow – Concetta Capisciolto – my dad’s mom. Concetta died three years later and my grandfather remarried. He married Raffaella De Francesca and they had five natural children and one from my grandfather’s first marriage. (Annunziato was his formal name; in dialect, everyone called him Nunziatu.)

I got to know my grandparents in high-school; my dad had a car and we would make the trip south for weddings – my aunts, uncles and cousins were all young. Also, in senior year, I traveled back and forth to Toronto as part of the application process into the Brothers. Later in college, because I had to go through Toronto on my way home to Sault Ste Marie, I always planned the trips with an over-night visit with my grandparents.

The guest-room, was next to my grandparents’ bedroom and every night before they got ready for bed, they would pray the rosary and remember Mario in their prayers. Mario was their oldest child and they had left him behind in an institution in Rome. He is mentally disabled. (The above image is Mario back in the early 50’s.)

Back in the 1950’s, Canadian Immigration would not let children with disabilities into the country. And rather than risk being denied entry, my grandparents left Mario behind in an institution. He is still alive and still institutionalized. I’m hoping to visit with him when I’m in Rome in September. 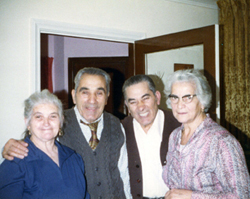 I believe that on the Zinga side of the family there is a genetic abnormality that has resulted in number of children with disabilities. My grandfather Nunziatu and my uncle Luigi, his older brother, both had mentally retarded children. My uncle Luigi’s son made it through immigration. He grew up in Canada; was never able to live on his own, but he was an active member of the family attending all Zinga family events. I don’t know enough about my uncle Mario to know how severe his disability is. However, it’s also true that other Zinga parents had very bright children; both ends of the spectrum are represented in the extended family.

Today, I met a family that has two boys – the older boy is very bright and the younger is borderline MR. The younger child was visiting the school; he is a perspective 9th grader. What prompted this post is a wonderful exchange with the young man. He is in our office waiting for a tour and he begins asking all these questions and in one exchange he says, “I heard this school was founded by teachers.” One of the admins in the office – Mrs. Welch – points to me. I raised my hand to acknowledging both the question and the pointing. The young man says, “Wow! and you’re still alive.” It made my day. There’s obviously nothing wrong with his sequencing patterns.