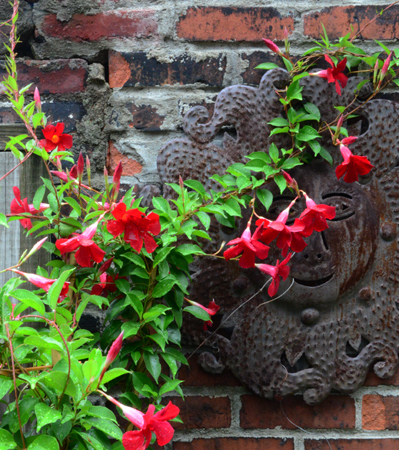 I’ve been listening to Claudio Villa’s  Carozzella romana   and marvel at the lyrical names of the Roman landmarks. (It’s interesting that in Italian the adjective Roman loses its proper noun status and is written with a lower-case  r .)

Tevere rolls off the tongue. Tiber requires a walk through the harsh syllables. The original name for the river resembles the English more than the Italian.

(In the image on the left, the face reminds me of the relief of the Tiber god on the Campidoglio steps – above image. According to legend, the god’s hair represents the river.)

The river begins in the Apennines in Emilia-Romagna, flows south for 252 miles and empties into the Mediterranean south-west of Rome. In the 1930s, Mussolini placed an antique marble column at its source. The inscription reads QUI NASCE IL FIUME SACRO AI DESTINI DI ROMA – Here is born the river sacred to the destinies of Rome. (One sick Italian with illusions of grandeur wrapping himself up in Roman revisionism. And getting hung upside down in a piazza in Milan was a fitting end for this male diva.)

My last two times in Rome were short stays. Dropped the rental at the airport, checked into the Hilton and then got on the bus into town. We’d have about three hours before we had to get back on the bus. The bus stop was at the bottom of the Campidoglio. In 2011, we went walking in Trastevere and on our walk back discovered the development down on the banks of the Tiber –  Lungo il Tevere . The name plays off the Italian word for seashore –  longomare  – which is on directional signs everywhere in the country.