the turkish steps outside of agrigentoprologue-6 – italy 2014 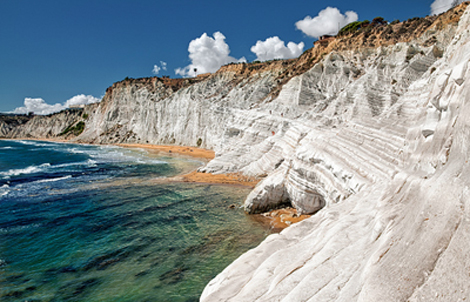 La Scala dei Turchi literally The Ladder of the Turks is a rocky cliff off the southwestern coast of Sicily. The steps, looking south, face Tripoli. La Scala gets its name from the geographical formations – step-like indentations on the white rock-face – and the historical fact that the Turks conducted many raids on the island from this entry point. It’ll be one of our side-trips while in Modica. I just hope that access to the steps is easy and convenient. Not necessarily a concern at most Italian beaches and landmarks. (I will say that signage on Italian roads is way better than signage on roads in France.)

From online images, in the summer the steps teem with sun-worshipers. Such an Italian approach to sun bathing; no one in America would think of slathering themselves in suntan oil and lying on a mountain side facing the afternoon sun. In 2009, we were in Panarea; the island has no beach, but hundreds of sun-bathers were sitting on the volcanic rocks that make up the island’s cliffs.