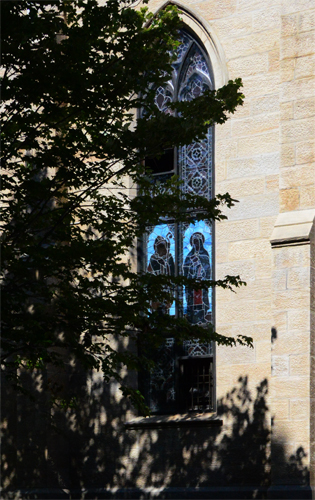 Stained glass windows are not a feature of most of the small churches in southern Italy. In Aprigliano, none of the churches I’ve been in have stained glass. (I associated stained glass with the mausoleums in the cemetery across the valley from Santo Stefano.) The churches have small windows near the ceiling, but these serve to release the heat trapped up high. There are several that have only one window on the wall opposite the altar. I guess with the intense heat the thick stone walls would be compromised if they had large window openings.

In moderate climates, windows were part of the architectural design. They were the eyes lifting to the heavens, they were the pages of Holy Scripture – the Old Testament, the Crucifixion, the Resurrection; they were The Virgin in glory. Think France, Germany and the UK; think Chartres, Cologne, Canterbury. (The Vatican has the magnificent Bernini window of the Holy Spirit over the throne of Peter. But it’s way up there on the altar wall. Is there any other stained glass in the basilica?)

The image on the left is one of the renovated windows of St. Peter’s Church here on the North Side. The building is undergoing a much needed restoration. The stone has been cleaned and the windows brought back to life.

I have two items to dig for during this summer’s trip – evidence of the Kingdom of the Two Sicilies and examples of stained glass windows in the churches of Calabria. Because of the last post and the research on Federico II, I am determined to understand how Sicily and Calabria are similar. I grew up believing that Sicily was a vast, backward province and now I’m discovering that it was and is a center of culture, art, music, philosophy and learning. I grew up believing that there were few similarities between the Calabresi and the Siciliani. I am suspect of that belief.