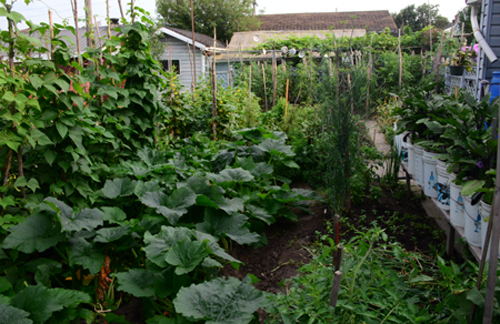 My father’s garden  has spilled over into what was once lawn in the back-yard. Between his greenhouse, the added plot and the pole beans along the fence, he has increased his garden by 30%. Ciccio gardens like he did back in Calabria. He plants in rows with watering troughs on either side of the plant. (As a kid it was my job, when I came home from school, to water the garden. I would put the hose down in the trough and once it filled, move the water to the next trough. I hated the job. All my other friends were out playing, I had to water.)

In the image on the left, I am facing north and shooting across the largest section of the garden. The section is behind the garage. And going from right-to-left, he has: eggplants in the buckets, tomato, dill, zucchini, pole-beans and beyond the zucchini are cucumber plants. Each morning I would go out into his garden and pick a cucumber off the vine to eat with my breakfast. (Peas and cucumbers were the sweet products of the garden and as kids we ate them whenever we could.)

My father’s favorite plants, the ones he lavishes time and energy on, are the pole-beans. The image on the left is Ciccio first thing in the morning. He has picked zucchini flowers that my mother will make into fritters. He also has beans in the basket and the pole-bean leaves on his jacket. (The leaves are sticky and cling to his clothes as he walks through the patch snapping beans.) There are two things he grows well – pole-beans and the fruit trees. My mother cooks the green-beans, cuts garlic into the shells and loose beans and then drizzles them with olive oil. Seane and I eat the whole bowl. We do not share with any other family member. While visiting with my parents, I lived on cucumbers, green-bean salads, zucchini-flower fritters and minestra made with peas and pasta. (I’m glad Seane doesn’t like fresh cucumbers, because I have to share the other foods with her. And she has a bit more clout with her nonno e nonna than I their only son. Go figure.)

There’s an unclaimed competition between my uncle and my dad. My uncle uses modern methods to produce the bounty in his garden. My dad doesn’t read English and therefore can’t take advantage of the new chemical mixes with their complex directions. He has to rely of a more organic approach. But let’s be clear, he’s not gone green. He has not made a conscious decision to avoid pesticides; he just doesn’t know how to use them. A side-effect that his liberal, gone-American son appreciates. (He would call me a ciuotu americanu.)