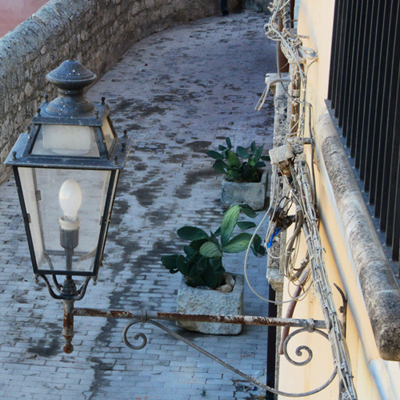 We are staying in a very old house that has been beautifully restored and renovated. The street floor has vaulted ceilings that have been sandblasted clean Half the area makes up the entrance to the house and the other half at one time probably contained a cellar or an animal holding area. The holding area is now a large bedroom, a kitchen, a dining/living room area and an amazing bathroom carved out of the ancient rock and made modern. The piano nobile is very pretty. A porch, overlooking the western half of the valley, has been carved out of the front part of the floor and a kitchen, bedroom, bathroom and living area make up the rest of the floor.

In the image on the left, I am standing on the small living room balcony. The street-light design and placement are standard throughout the old town. Modica is one of the 8 small towns that was totally rebuilt after the 1613 and 1693 earthquakes. And all 8 towns were rebuilt in the Baroque style. (Baroque describes the grand, overstated, dynamic late-European art between 1650 and 1700. St. Peter’s in Rome is grand Baroque.)

The wires show how electrical and cable get to homes in these ancient towns. All outside wires run along the walls of the houses and because all housing is contiguous there is no problem with gaps.

The cactus plants are everywhere in Sicily and their fruit the prickly-pears or as the Italians call them ficodindia are eaten and used to flavor liquors and pasties. The plants were originally used as boundary markers between properties. One farmer got angry with his neighbor and decided to strip the fruit off the plants. The plant re-bloomed and produced even larger fruit the second time around – a new crop yield method was discovered.