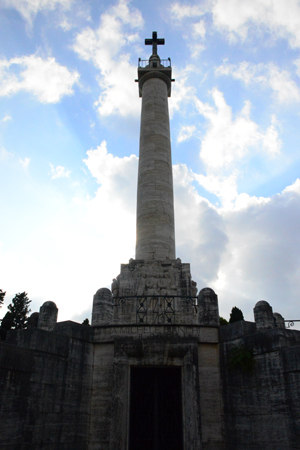 Today was a down day, Sarah and I did laundry, Rick went down to the Mar Tirreno to swim in the Mediterranean.

For an outing we drove the half-hour to Paola and visited the famous pilgrimage site of San Francisco di Paola the patron saint of Calabria. San Francisco was a mendicant friar who lived a very simple life. He and his early followers hollowed out caves in the mountain above Paola and lived in them. (The people of Calabria saw in this man a person most like themselves – simple, honest, hard-working.) He was the founder of the Roman Catholic Order of Minims. (The name Minims comes from the Italian word minimo, meaning the smallest or the least.) Unlike the majority of founders of men’s religious orders, but like Francis of Assisi he was never ordained a priest. The Minims abstinence from all meat and dairy products. And the friars do not wear shoes, only sandals are allowed. (Any wonder the poor people of Calabria saw in this man someone who was most like them.)

Today, the Santuario di San Francesco is a favorite pilgrimage site for all Calabrians. People throughout the province come to Paola and the Santuario to get married. Busloads of pilgrims are driven up to the top of the mountain to visit the site.

The old church, the cloister and the gardens are beautifully preserved. To accommodate the hordes that ascend, there is a new church. This too is a beautiful space and a great example of modern Catholic design.

After leaving Paola, we drove back and stopped to visit the mausoleum of Michele Bianchi a Fascist. The monument is at the bottom of the mountain on a promontory. The pillar is Belmonte’s signature logo. Under Mussolini, he was the minister of Labor and brought to Calabria much needed money for road construction, water treatment plants and railroad development. The monument is a great example of Fascist architecture – imposing verticals that speak to power.