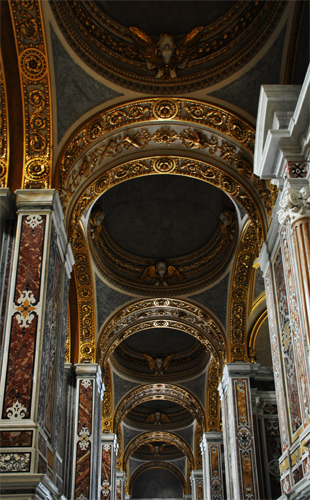 We drove from Naples and stopped at Cassino to see the WWII cemetery and the monastery at the top of the mountain. St. Benedict of Nursia established his first monastery here around 529. He remained the rest of his life here on the mountain. It was at Montecassino that he wrote his Rule, a set of guidelines for laymen wishing to live a spiritual. The Rule of St. Benedict would become the pattern for monastic rules across medieval Europe.

In World War II, the hill of Monte Cassino was part of a German defensive line guarding the approaches to Rome. Montecassino became the target of assault after assault by Allied troops, and was finally destroyed by air bombardment. The hill was captured at dreadful loss of life by the Polish Army and Italian refugees. After the war, the abbey was rebuilt based on the original plans.

The entire monastery complex was rebuilt in all its splendor. (The image on the left is the ceiling in one of the side isles in the basilica. The cupolas are not frescoed.) While southern Italy was being emptied, because of the post war poverty, the Benedictines here on the Roman plain were rebuilding the bombed monastery. Talk about the mess that was Italy. My family and millions of other Calabrians had to leave their homeland and head to foreign shores in order to put food in the mouth of their children and give hope to their families. All the while, the Benedictines at Montecassino were paying for gold-leaf on the ceilings of the rebuilt abbey.

Throughout the trip from Palermo to the Val di Noto to the Naples to Cassino, we saw the wealth of the 1% that owned Italy. (In the museum at Montecassino, there are old maps of the land/territory that the monastery controlled and managed. For miles around the hilltop structure the land and all its environs belonged to the Benedictines.)