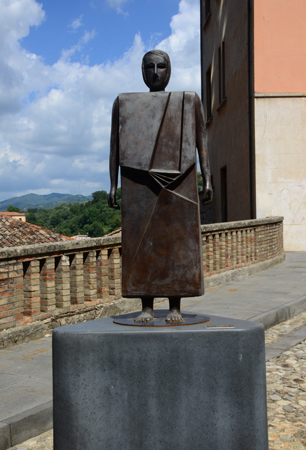 I have to admit that I do not like any Calabrian city. Reggio, Catanzaro and Consenza are all dirty, not very well designed and full of ugly, modern concrete apartment buildings. None of the three have elegance of a Noto or the geometry of Modica the largos of Scicli. Yes, the towns of La Val di Noto were all rebuilt after the 1693 earthquake and the Spanish king, the nobility and the Church all cooperated in giving architect Giuseppe Lanza, duca di Camastra carte blanche in the rebuilding. The cities of Calabria grew randomly, municipal leadership, city planning, over-sight were missing ingredients. And the result is a hodgepodge environment.

The Calabrese have fully participated in the migration from their medieval, hilltop towns and settled in the newly built concrete structures sprouting along the perimeters of the ancient towns or in the cities of Southern Ontario. In Italy, they, more than most other Italians, have embraced English as the lingua franca, the lingua of commerce. (Is that because their legacy is more of the soil and the mountains than of cathedrals and frescoes? The image on the left is a Calabrese woman – a simple person in her peasant dress.)

The foods, especially the fruits-and-vegetables, the sopressata and the breads are among the freshest and tastiest of anywhere in Italy. The tomatoes of Belmonte with their tear-drop shapes, the eggplant in olive oil at the co-op at the bottom of the mountain, the pastries from Cosenza are worth every calorie.

The message from Calabria is: avoid the large cities, travel the secondary roads, visit family, and eat as much local food as you can get your hands on. (Last night I made a simple pasta e faggioli, but in the Calabrese style. We bought the Barlotti beans at an open market that was part of a festa – a community celebration of a Marian feast-day. I went up to a street vendor who was selling crates of tomatoes for sauce and asked him for 5 ripe one that I could use for supper and I stole basil from one of the pots around the corner. Sarah and I shelled the beans, I sautéed the tomatoes in olive oil flavored with garlic, cooked the past in the water that I had cooked the beans and then mixed everything. We drizzled olive oil with pepperoncino on top of the pasta. It was wonderful.)