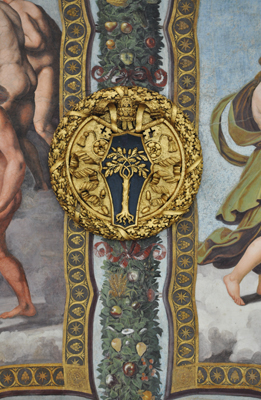 This being our last day in Rome, we wanted to do an easy walk. We decided to go to the two museums down the street from where we’re staying.

The Villa Farnesina, located in Trastevere, is considered one of the noblest and most harmonious creations of Italian Renaissance. Cardinale Alessandro Farnese bought it 1579 and named it Farnesina, a diminutive form of the family name, to distinguish it from Palazzo Farnese on the other side of the Tiber. In the art world, the Farnesina’s claim to fame is Rafael’s fresco the Triumph of Galatea. Raphael did not paint any of the main events of the story. He chose only the scene of the nymph’s glorification. Galatea appears surrounded by other sea creatures whose forms are somewhat inspired by Michelangelo figures in the Sistine.

I am less interested in the one fresco, but more interested in the fact that a cardinal who already had a super-sized villa on the other side of the Tiber needed to buy a smaller house with a large garden, something more country-style. Was the cardinal a predecessor of the billionaires who are crowding out the millionaires in Vale?

It took generations for Italy to die under the weight and greed of the 1%, but it did. World War II was the end of Italian political and financial influence on the continent. It was was 400 years between the time that Cardinal Farnese bought the villa and the end of WW II. (The above image is the coat-of-arms for the Chigi family who had the villa built and from whom the Cardinal bought it.) How long will it take American corporate society to bankrupt the country? Both empires were and are being built on the backs of the 99%.