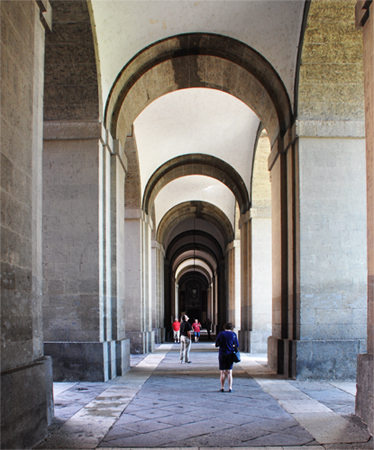 All the Baroque building are either built out of a black rock or trimmed out in it. (It’s like black bunting at a dignatary’s funeral.) Also the streets in the old city are all paved in a back rock. After some research, I come to find out that it is a volcanic Piperno stone. It creates a funereal environment. And to top it all off, the main cathedral –Cattedrale di San Gennaro – is all about the worship of the dead – there are over 40 reliquaries in one chapel alone each is a silver bust of some saint and it contains a bone fragment, a piece of cloth or some other object that the saint had handled in his/her life. And let’s not forget the blood of San Gennaro and his bones in the crypt under the altar. (Sarah and I walked down to the crypt in the Cattedrale and 30 some women were kneeling in front of an altar that contained the bones of San Gennario praying the rosary.)

Naples was the only place we saw people go up to coffins and reliquaries and touch them, kiss them, pray in front of them. None of this behavior is seen as strange or in need of corrections.