the nobles and the churchepilogue-1 – italy 2014 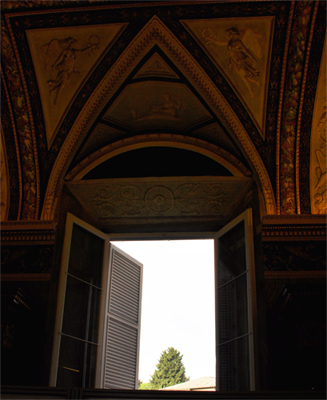 I’ve been thinking about all the churches and palazzi we went into and my conclusion is that the churches were the lesser of the two evils. The churches, even in the time of the one-percenters, were always open to the public where the palazzi were off limits. The high, brick wall that surrounded the formal gardens of the Villa Farnesina is still intact. There was no access to this country-home.

The image on the left was taken in The Vatican. We were walking down a hall full of tall cupboards, the filing system before the modern age, and there was an open window. For me, it suggests the nobles, in their gilded palazzi, looking out.

Throughout the 3 weeks, we went in and out of churches and palazzi in order to see the art and the architecture. The palazzi blew me away. The fact that the one-percenters could live in such splendor, had access to master craftsmen was information I had never applied to my understanding of Italy. It became most evident at Montecassino, the monastery that was re-built in all its splendor, in four years after having been destroyed in WW II. And during the rebuilding, southern Italy was being emptied, because of poverty. Carlo Levi’s Cristo si è fermato a Eboli became the metaphor for the poverty of Il Mezzogiorno – the region south of Naples. As an expression it means the opposite of its literal meaning – Christ stopped at Eboli. As an expression it suggests that the people of Il Mezzogiorno feel they have been bypassed by Christianity, by morality, by history itself; that the people of the south have been excluded from the full human experience.